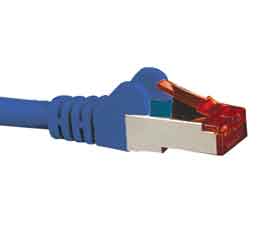 Category 6a (CAT6 Augmented) is defined at frequencies of upto 500Mhz, twice that of CAT6.

Hypertec Shielded CAT6a Patch Lead cables feature double shielding where individual twisted pairs are foil shielded, before a final braided wire shield is wrapped around the complete cable bundle, all these shields are connected to the metal frame which is an integral component of the Hypertec RJ connector.

The shielding is particularly critical in environments with increased levels of noise such as hospitals, telco operations infrastructure, radio and television broadcast applications, X-ray theater's and in the vicinity of mains power transmission lines, switchyards and substations.

Hypertec CAT6a has improved performance (speed and distance) and crosstalk prevention, along with a snag-less boot where ‘ears’ on the boot allow you to remove cables from heavily cabled areas, reducing the chance of broken retaining clips and reducing the possibility of leads becoming accidentally unplugged.